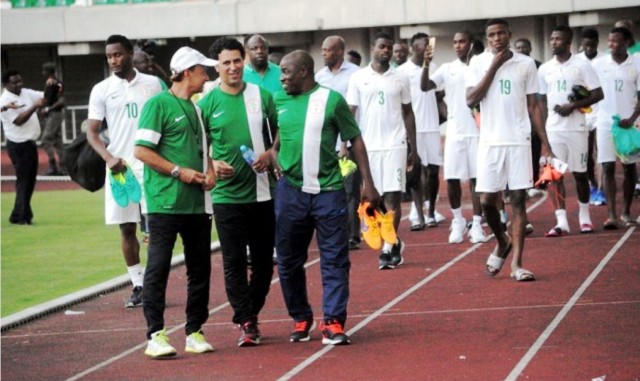 Nigeria head coach, Gernot Rohr admitted that his side was lucky against Zambia last Saturday.
The Super Eagles of Nigeria qualified for the 2018 FIFA World Cup finals after defeating Zambia 1-0 in Uyo.
The only goal of the match was scored by Alex Iwobi with 17 minutes left on the clock at the Godswill Akpabio International Stadium.
“We were lucky that Iwobi came off the bench to make the difference,” Rohr said on CAFonline.com.
“It was a difficult game and we didn’t underrate Zambia,” the German tactician continued.
“We knew it will be a tough game and that was the case.”
As a result, Nigeria, who won Group B, became the first African nation to qualify for the finals which will be hosted by Russia.
The Super Eagles are set to travel to Algeria for their final Group B match which will be played on 6 November 2017.

IDUMUJE-UGBOKO AND THE STRANGLEHOLD OF A ROYAL PRETENDER

RE: IN OUR DUTY AS DESCENDANTS OF OBI NKEZE & OMORHUSI...

HON. NED NWOKO, A POLITICAL ENIGMA WITH A DIRECTIVE COMPASS.

STARS UNIVERSITY IS ESTABLISHED TO CATER FOR UPCOMING STAR ATHLETES….Prince...

STARS UNIVERSITY, IDUMUJE UGBOKO, GETS A BOOST FROM NUC